THT-The Kenyan government has officially named the diplomats who will be in charge of its office in Somaliland.

The Ministry of Foreign Affairs of the Republic of Kenya wishes to inform that four officers were deployed to Kenya Liaison Office in Somaliland as follows;

“The Ministry of Foreign Affairs of the Republic of the Kenya avails itself of this opportunity to renew to the Liaison Office of Somaliland in Nairobi the assurances of its highest consideration.

The move is part of the implementation of various agreements signed by the presidents of Somaliland and Kenya earlier this year in Kenya. 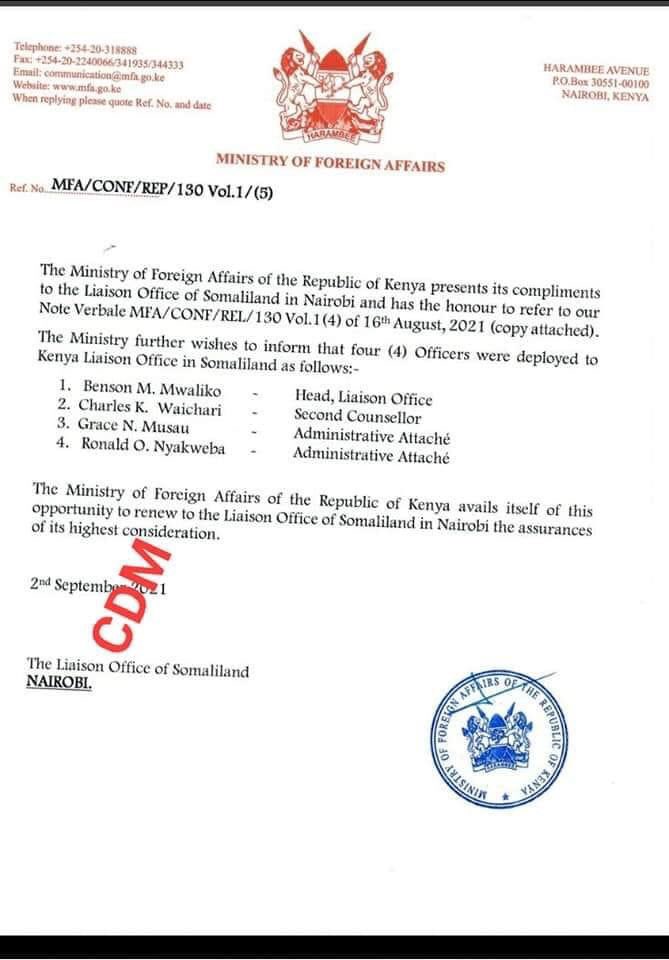 A delegation from the Kenya Ministry of Foreign Affairs is in the Somaliland capital of Hargeisa to finalise plans to open up a Kenyan consulate in the Horn of Africa nation.

Reports indicate the team has been in Hargeisa over the last fortnight working on the final plans that will see Kenya become only the third African nation after Ethiopia and Djibouti to set up a consulate in Somaliland.

Plans to have a Kenyan consulate in Hargeisa were cemented last December when Somaliland President Muse Bihi made an official visit to Kenya on invitation from President Uhuru Kenyatta.

Development and progress is achieved through consensus solidarity, says the President...

President sacks some RGs, transfers and redeploys others in major administrative...