THT-‘Concerted national efforts in mutual setting to address issues bipartisan has always been achieving fruitful end-results in the country’.

This observation by the President H.E. Bihi Abdi, expressed yesterday Saturday 12th June as he met the National Elections Commission (NEC), at the Presidency, is what he also lent as his advice for the nation of Somaliland. 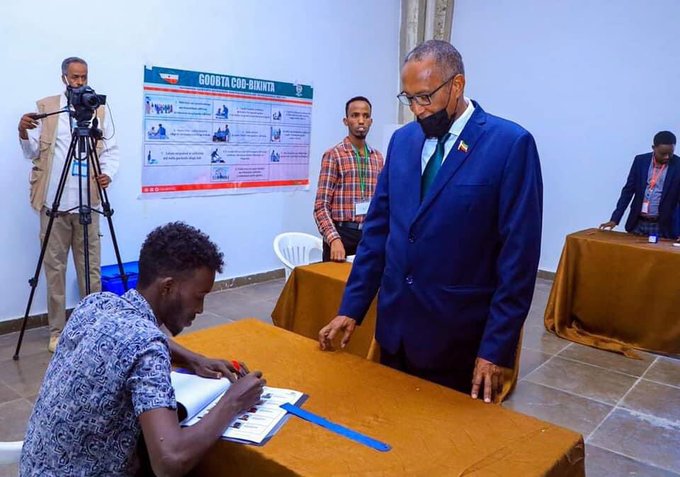 “Foreigners were mesmerized to see the members of various political parties queuing to vote while exuding merrily festivity-like emotions”, said the President.

He lauded the NEC for a job well done that confounded all friends and foes for their diligence and organizational management.

He noted that for the almost a thousand aspiring candidates in the general elections (over nine hundred were fielded by the three official political parties), the electioneering processes, through the campaigns to the polling and counting at last saw all competing parties, candidates and supporters accept the results boldly without any qualm.

All political parties echoed the same words of appeal to the nation for peaceful stability, sobriety and maturity in all personal or group conducts during the whole electioneering processes exercise.

Such scenario said the Head of State, was only but a blessing from the heavens.

He said that he thanked God for having blessed the country with such patriotic people.

Pointing out that the diligence of the NEC officials was quite formidable and made a great mark here and abroad, the President precisely hailed the NEC decision of announcing tentative results at their district level for the civic ballots.

He said the move offloaded much pressure and anxieties hence set in trust and acknowledgment.

The President particularly hailed the stakeholders starting with the populaces and the political parties, the security apparatus and the general organization of the processes for the timely, swift, peaceful and justified exercise and its result.

He repeated the fact that when there is a mutual understanding for a need of a cause hence backed by whole-hearted concerted efforts the result was a success.

Such whole-heartedness, he quipped, was the case in the just held 31st May civic and parliamentary elections.

He equally thanked both the public and private media for being impartial during the political campaigns and after.

Transforming Berbera into a world-class centre of trade

NEWSWEEK- East Africa’s Ray of Hope in a Challenging Year for...

SOHASCO, UNFPA and the Ministry of Youth jointly awarded certificates to...